Nothing wrong with that, all political parties spin. You might as well criticise a dog for barking.

The Fianna Fáil spin is that the criticism of the taoiseach’s performance on Morning Ireland is a storm in a pint glass, all the fault of Simon Coveney and Fine Gael. 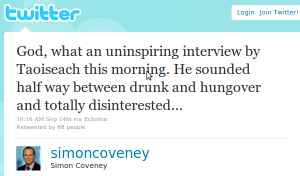 Bear with me, because this will take more than the usual 200 words.

A Twitter search for the word “taoiseach” in relation to Morning Ireland makes its first appearance at 7.51am GMT (8.51am local time) yesterday.

Before then, most appearances of the word are in retweets of a Philip Boucher Hayes joke about Conor Lenihan and evolution, made the night before.

At 7am, morningireland tweeted that the taoiseach would appear on the show “after 830am”.

The earliest tweet I found on Cowen’s performance comes from gavreilly at 8.51am. It reads: “Brian Cowen speaking on Morning ireland, sounds unusually deep-voiced. Was the Taoiseach up late entertaining his Soldiers?”

The first mention of drinking comes one minute later, when mcj66 wrote “#morningireland sounding a bit slurred Taoiseach. On the piss with the vegetables til an hour ago?”

The third tweet, from dermie, asks “Is it just me or is our Taoiseach seriously hungover on Morning Ireland right now?”

There follow references to Cowen sounding “worse for wear”, “hungover, disinterested, arrogant and unconvincing”, “a bit slurred”, “on the piss”, “shook”, and “CLEARLY having a very rough night”.

In total, before Simon Coveney tweeted at 9.16am, 18 tweets use the word “taoiseach”, most referencing alcohol/hangovers and speculating if he was drunk or hungover. [Oddly, twitter also says the Coveney tweet came at 10.16 (timezone not specified).]

Twitter search is limited and only allows me to view 30 pages of tweets, with a maximum of 50 tweets per page. The 1500 tweets that gave me only go back to 1pm yesterday. And inevitably, there would have been other tweets in response to those I quoted, referring only to “he” or “him”.

Fortunately (kudos to @eolai for pointing me in the right direction) Google Updates allows a finer view of the early reaction . The word Cowen appears in over 20 early tweets. Again, the vast majority comment critically on his Morning Ireland performance.

There are also three hits for the common misspelling of “Cowan”, remarking how he “sounds like he has had a good night”, “sounds befuddled, half asleep”, and asking “Yikes, how many pints did Cowan have last night? Slurred words at mo on Morning Ireland…”

What’s clear from this is that Simon Coveney did not start this storm. His profile as a TD may have amplified it, but he only said what people were already thinking, tweeting, and talking to each other about in workplaces all over Ireland.

Noel Whelan complained this morning on Pat Kenny about twitter “elites”. I submit that the “elites” are the political correspondents who spent the night in a bar with the taoiseach, listening to his funny impressions of Micheal Ó Muircheartaigh.