Newstalk broadcaster Marc Coleman tweeted on Saturday that 80% of TDs came from the public sector, so I had a look. Listed above are some of the jobs our TDs held before they were elected.

Of the 153 TDs whose backgrounds I could establish, 89 unambiguously worked in the private sector. That’s 53.6% of the 166 seat total.

There are blurred lines, of course. One publican is also a farmer. The stockbroker is also a journalist. The barman is also an author, among other things. One chief executive used to be a banker. One of the farmers used to have a civil service job.

A total of 35 TDS unambiguously come from the public sector. Teachers make up the majority with 27, but there’s also a water inspector, a hospital administrator, officials from Bord Fáilte and Bord na Gaeilge, a social worker, an army officer, an adult education director, and a CIE manager.

Again, there are blurred lines. One of the teachers is also a publican.

Then there were the 29 jobs I couldn’t fit neatly into either public or private sector. Some jobs are like that. A policy advisor, a research scientist, a personnel manager, a medical lab technologist, an economist, and so on. I couldn’t find any information on the previous jobs held by 13 TDs. And 13 more listed their occupation simply as “public representative”. Classify that.

Either way, the claim that 80% of TDs come from the public sector, and therefore with the baggage of a supposed “public sector mentality”, doesn’t stand up to scrutiny. 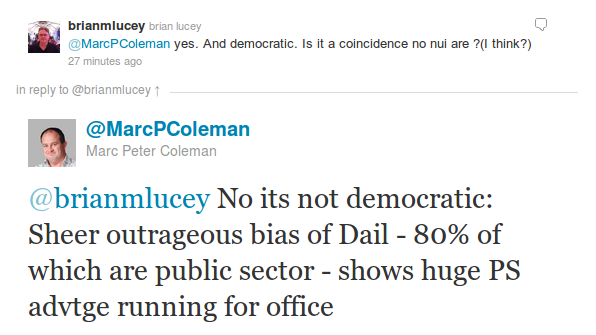