A while back, someone posted to a freelance journalism group in Facebook looking for some advice on rates/ They’d been told by a published that they paid “standard rates”, and naturally, this raised the question, what are the standard rates?

So I answered in part as follows:

There is no such thing as a standard rate. and if I were to tell you one, I would be breaking the law.

Once upon a time, there were agreed rates in Ireland for freelance journalists. There was a particular fee is you were called in to do an eight-hour sub-editing shift, or sent on assignment for the day to cover a court case, or an inquest, or any other story. These rates were negotiated over the years between publishers and freelances, through the National Union of Journalists.

And then the Competition Authority came along, and decided that since freelances are self-employed, if we negotiated a set rate for a shift, or an assignment, we were acting as a cartel. And cartels are illegal.

And that means that, if I tell you how much you could expect to get paid for a reporting shift, or for a 1000 word feature article, I’m breaking the law.

WhoPaysWrtiers is US-based, so Irish law doesn’t affect it. and being US based, it mostly tweets out data on US publishers, though I’ve seen links to other titles too, like the Guardian, which have a US presence.

In theory, I could send them data on what an Irish newspaper paid, and they could tweet it out.

But it is not entirely clear if I can legally do that. Am I, by sharing that information, encouraging a cartel to form? What if someone else sends the rate data, and I just link to the tweet, or retweet it? What if I link to the rate, and comment that its too low, and should be 50%, or 80% higher? Am I encouraging the formation of a cartel? Are Denis O’Brien and Rupert Murdoch shaking in their boots because I could bring down their empires by tweeting the rate for a job?

There are ongoing murmurs about amending the law to create an exemption from the Competition Act for freelance journalists (and for some other classes of traditionally casual workers, including actors and session musicians). There was a commitment to change the law in a social partnership agreement called Towards 2016, but that was abandoned when the government got distracted by the Great Crash and the IMF. Ivana Bacik proposed a bill in the Seanad in the dying says of the last government (see below), but Labour are no longer in power, so for the foreseeable future, no one can tell you what a “standard rate” is.

So here’s my advice.

When someone says they will pay you a “Standard rate”, ask how much that is, exactly. And when they tell you, don’t treat it as a fact of nature, but as the beginning of a negotiation.

And if someone instead asks you what your “standard rate” is, don’t give them a number, because you end up bidding against yourself, Instead, see above, ask them what they pay, and treat the answer as the beginning of a negotiation. You know what your time is worth, so depending on the offer either (a) accept if it is insanely generous, which is rare, (b) negotiate if its too low, or (c) give them their money’s worth when they quote a ridiculously low number, which may or may not be a good thing, but is sometimes necessary. 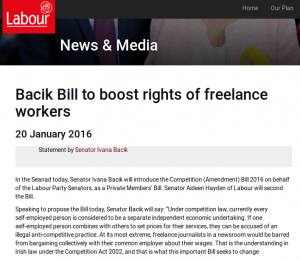