Dan Boyle went down to Tralee last week to say ‘something controversial’.

Boyle must have been aware of poll findings, and told his Kerry audience it was time to review the programme for government. 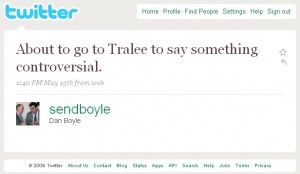 ‘Most of the Green Party elements of it have now been implemented,’ Boyle said.

‘It is a document that is in need of review, and the period after these elections would be an ideal opportunity to do that.’

On Saturday, just in case anyone thought Boyle was speaking off the cuff, party leader John Gormley repeated the call to renegotiate the programme.

Political correspondents lost the run of themselves, talking about cracks in the coalition and the last days of the government.

Fianna Fáil huffed and puffed, until on Monday the taoiseach agreed to review the programme for government.

He added there were ‘no circumstances in which his resignation would be required.’

As Eamon Ryan said, ‘we are not looking for a way out of government.’

Behind the overblown reportage, the Greens sent a clear message to Fianna Fáil last weekend.

Barring accidents, there will be no election. The Greens don’t want to walk, they want policy points. Anything but annihilation at the polls.