You know how it goes. A bunch of guys (and they probably were guys, not gals) sits down to make some plans. For the most part, the meeting is businesslike, focused on the task at hand. But inevitably, because we are social animals, someone will crack a joke at some point. And just occasionally, someone will make a note of the joke.

You could see it happening here. Civil servants planning the first visit of the British monarch could pencil in a wreath laying ceremony at Bodenstown, perhaps. Or throwing in the puck for the off in Croke Park.

And of course, the inevitable Friday night interview with Ryan Tubridy.

Something similar happened in the British Foreign Office when they got together to plan the Pope’s visit. In a Sunday morning tweet, Dara O’Briain’s quietly pointed out the hypocrisy of the tut-tutting that followed when he observed that ‘the man responsible has been quietly moved’ to another parish. 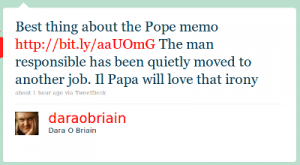 There’s something reassuring about the idea of a few jokes during a serious meeting. And while writing it down might not have been the brightest idea, I wish just one politician would have the guts to tell the fusspots to lighten up.