Since I posted about A2Z Taxis earlier this afternoon, a couple of other people tweeted to ask the A2ZTaxis account about their “only IRISH drivers” tweet, and what it meant.

A2ZTaxis answered their enquiries as follows:

@SusanSRyan it is not or policy, we just just don’t have foreign national drivers at present.

@A2ZTaxis it is not or policy, we just just don’t have foreign national drivers, Tune in to NEWSTALK BREAKFAST SHOW tomorrow mornin.

I saw those replies on twitter, so I asked a question of my own in response to the last of those questions. That question turned into a slow-motion conversation on twitter. For convenience, rather than sending any readers off to navigate search engines, I am reproducing the exchange below (apologies for the curious literals and odd punctuation, but I want to reproduce the exchange as it happened without edits or distortion):

Q: Have you ever had foreign drivers @a2ztaxis? Have any ever applied? What did your tweet mean? Why was it necessary to say all drivers Irish?

A: Because at present all our drivers are Irish. No foreign drivers have ever applied for a radio.

Q: Doesn’t that strike you as odd? What are the processing procedures once a driver applies?

A: never gave it any thought till today. If a driver has passed the taxi regulator’s and SGS requirements they just need to call us

Q: Why did you feel it necessary to tweet the fact your drivers are all Irish, if it never struck you until today?

A: because we spoke about it this morning in the office

Q: And at this meeting, why was it considered a good idea to say on twitter that all your drivers were Irish?

A: Because we get alot of callers who ask for Irish drivers

A: we do not discriminate against foreign nationals. Our accounts manager is English. All our drivers are self employed.

Q: If you did have non-Irish drivers, would you deny them referrals if customers asked for an Irish driver?

A: if you asked for a lady driver, would you be happy if I sent a man?

Q: You haven’t answered me. If you did have non-Irish drivers, would you deny them referrals if customers asked for an Irish driver?

A: if a non Irish driver came to A2Z I would discuss that sinario with him or her in advance. What would you do ?

Q: Do I take that to mean you would tell a non Irish driver you would discriminate if a customer requested it?

A: we rent radios to taxi drivers. The driver is my customer. The end user is theirs.

Q: Still haven’t answered. If you did have non-Irish drivers, would you deny them referrals if a caller asked for an Irish driver?

Q: Final question then. If it was not racist, then what was the “only IRISH drivers” advertisement on twitter meant to convey?

It’s been over an hour, and I’ve received no reply to my final question, so I guess I’ll have to tune in to Newstalk in the morning to hear more. 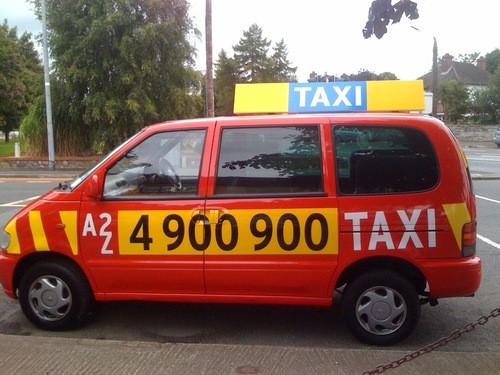