The Crystal Swing phenomenon began when they came to the attention of ‘pantibliss’, the blog account of Pantibar, a Dublin gay bar. [Pantibliss in turn gives the credit to Robert Popper].

From there, word spread across twitter, and the youtube video was picked up by Sean Moncrieff. It was now “viral”. Mark Little has blogged about how word spread. 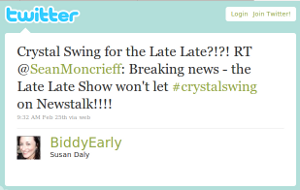 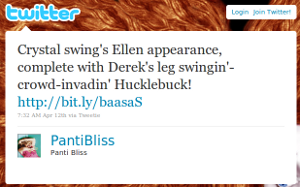 A bright spark in Bord Failte paid for a flight to Los Angeles to appear on the Ellen Show. Their twenty minute slot (yes, it’s a youtube hit too) is probably the board’s best money this year. Give that man or woman a payrise. 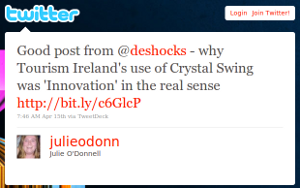 The television appearances introduced the band to their natural fanbase in rural Ireland.

The bloggetariat doesn’t like that. The joke wasn’t supposed to be on us. 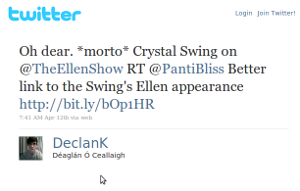