According to the latest RedC/SBP poll, the Fianna Fáil vote is at 16%, down one percent from the last poll in December, right?

Reading the small print, there’s a three percent margin of error. RedC is 95% certain Fianna Fáil support is somewhere between 13% and 19%. And they were 95% certain that support was between 14% and 20% in December.

In other words, no change.

Pollsters will always talk about snapshots, and explain that what matters is not what one poll says, but the trend over time. But newspapers need headlines today, so they just go with a single number. A party up or down 2% is enough to make a headline, even if it’s statistically insignificant. A party leader leaped 30%, or dropped 19%, as choice for taoiseach, even if party support numbers means it doesn’t matter either way.

So what do the long term trends say? I graphed the RedC polls from December 2009 to January 2011 and had a look.

Fine Gael has been remarkable stable. A high of 35, a low of 30, mostly 33 or 34. Every single poll puts them within that six percent range. Their average vote is 33, plus or minus 3.

Fianna Fail were pretty stable in the 20s until September, when they sank to the teens, where they’ve been ever since. The cause? There were probably several, from the “congestion” interview to Ivor Callely, or it may just have been that some people just gave up. Take your pick.

Sinn Féin? They were around nine percent all year until December, when they shot up to 14%. It’s tempting to put that down to the fact that Pearse Doherty is a capable media performer, while Gerry Adams is a fish out of water talking southern politics, and Mary Lou McDonald’s voice is the political equivalent of nails across a blackboard.

And what about Labour? They were stable at 17% until March 2010, then surged into the 20s. Lately though, they’ve declined again. Labour is in a tricky position. Swing too far to the right to pick up an ex-Fianna Fáil or disgruntled Fine Gael vote, and they lose the left to Sinn Féin and independents. But stay too far to the left, and moderate support slips away.

But it’s among independents that we see the most remarkable changes. From around 9-10% all year, they’re now at 15%. That’s a number I’d like to see broken down. Were those voters looking forward to Fintan O’Toole or David McWilliam in government, or are they fans of the United Left Alliance or the National Reform unparty? 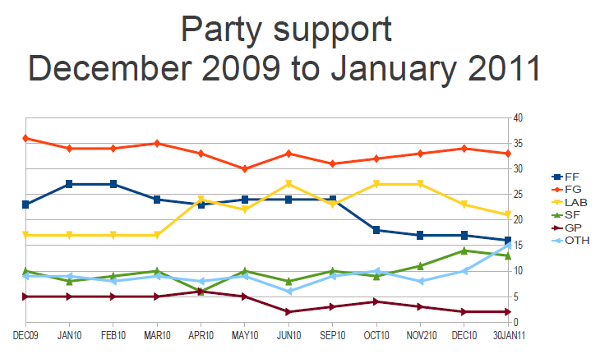