Sitting in my inbox for a while now has been a letter from SIPO, along with various records of politicians’ expenses, all revolving around the issue of Sinn Fein and the “average industrial wage”.

On Friday, Pearse Doherty published a set of accounts on the Donegal Daily website, which makes it time to revisit the exercise. [Pádraig Mac Lochlainn did the same thing, so I’d guess we’ll see similar disclosures from all SF politicians soon.]

Recap: Sinn Féin representatives regularly point out that they only “draw down” the average industrial wage. Others (myself included) have pointed out, they in fact “draw down” their full wage from the taxpayer, even if they choose to donate it to the party. How you spend your money doesn’t make it cheaper to pay you, in other words.

He paid an employee working in his constituency office €24011.24

He apparently spent the balance on various office and administrative expenses, including a computer, a carpet, phone and electricity bills, and an FOI request. 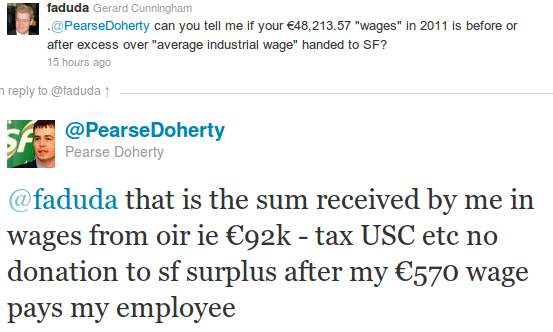