In short, Quantum Research appears not to exist, at least not as a market research company. No such name appeared in the records of the Companies Registration Office, which lists all companies and trade names In Ireland, past and present.

It never occurred to me to check for trademarks. Then David Cochrane stumbled across this: 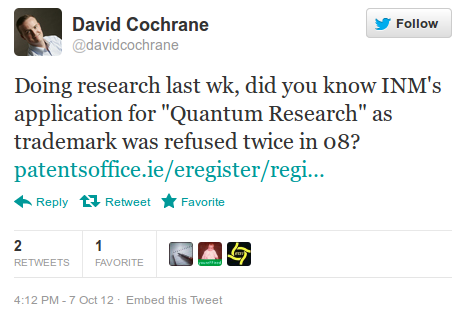 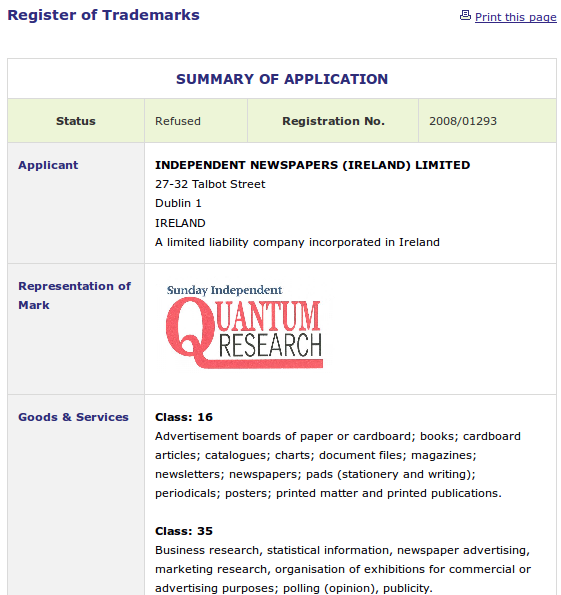 To anyone paying attention to the Irish media scene, it’s pretty clear that Quantum Research was a fiction behind which the Sunday Independent hid when it wanted to create an opinion that was more astroturf than grassroots.

The authenticity of Quantum Research has been questioned by many online, including IrishPollingReport, but you’d be hard-pressed to find any direct questions raised about them in the mainstream press. The Irish Times even had to publish a “clarification” after Denis O’Brien complained about “phone polls of questionable provenance.”

Since then, O’Brien has increased his control of Independent News and Media. Maybe it’s only coincidence, but Quantum Research seems to do a lot less work for the Sunday independent these days.

UPDATE 1: My mistake. Quantum Research were still operating as recently as one month ago.