Yesterday, the news cycle covered Conor Lenihan’s proposed launch of a book on creationism. The science minister began by defending the gig as a favour to a friend, then the story went away when the invitation was withdrawn.

This afternoon Sean Moncrieff interviewed the author, John J May.

Among the tweets in response to the show were some of mine, one of which prompted Moncrieff to accuse me of censorship.

There’s probably a Latin label for the logical fallacy which confuses criticism with censorship, but we’ll let that pass.

Instead, I want to address the second half of Sean’s tweet. Sean says I don’t get to define what the issue is.

Maybe. But I do know what’s not at issue. Evolution. 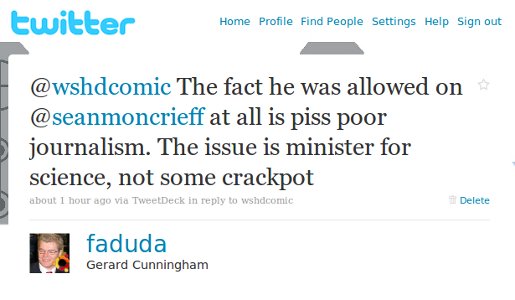 Darwin published Origin of Species 151 years ago. Since then, the theory of evolution has been subjected to a battery of tests by scientists.

Guess what? So far, it’s passed with flying colours. And those scientists are motivated. Prove Darwin was wrong, you get a Nobel prize and everlasting fame.

So no Sean, some crackpot clinging to a bronze age fable isn’t news. But I submit the science minister of a “smart economy” endorsing his ramblings is an issue.