A few weeks ago, a message appeared on a Facebook journalism court from a reporter, who had just been told he would not be allowed advance notice of district court cases any more because of “data protection” issues. 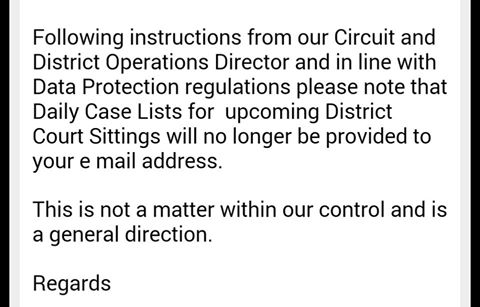 I was curious to learn more, so I sent in a Freedom of Information request to find out what these instructions were, and what the reasoning behind them was.

An email has now been released to me, and a section “sets out the detail of an incident which gave rise to the issue of the email has been redacted as it contains information in relation to the functions of a Court Office which if released could have a significant adverse effect on the performance of this office function and the general management of the Court Office”, a reason which tells me nothing but mirrors exactly the wording of an exclusion provided for in legislation.

No further details are given about the “incident”.

The full email from the Circuit & District Courts head of operations appears below.