Pearse Doherty got into bother last week, when the Donegal Sinn Féin website identified him as a civil engineer. [Not just the website by the way, as shown by the image opposite, from Pearse’s byelection literature]. 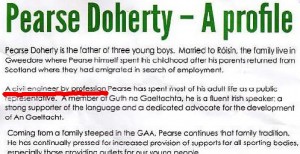 “I’ve always been up front. I told people in many interviews that I left college after two years.
“I went into work in the field, I moved back to Donegal. I actually enrolled in LYIT in Letterkenny. I didn’t complete the course because I stood in the general election of 2002.
“The course I was doing was civil engineering, after two years of that course you get a qualification of civil engineering technician, I graduated with that.
“Where this arise from is a website… my profile has that I’m a civil engineer. I am a civil engineer technician.
“We’re in the heat of an election campaign, our opponents are going to blow it out of all proportion.”

So if Pearse was asked about his qualifications, you’d expect him to say, “I’m a civil engineer technician”, right?

As it happens, Pearse was asked just that question a few months ago. You can see his answer below.