When Jason Walsh first spotted the ‘internet tax‘ proposal in the Green manifesto during the election campaign, I took it as a typical example of Green eccentricity.

The following day, when I spotted a similar idea for a ‘content tax‘ in the Fine Gael manifesto, I took it a little more seriously. Greens were never going to get close to power in the 31st Dáil – Fine Gael were a certainty.

The idea behind a ‘content tax’ is pitched at several levels, all of which Pat Rabbitte explained without much enthusiasm on the Last Word this evening: RTÉ reckons there’s about a 15 percent evasion rate on the TV licence; people consume “content” using computers and smartphones as well as TV; RTÉ has an unfair competitive advantage.

Rabbitte stuck to speaking about RTÉ budgets for the most part, despite several questions about commercial funding. TV3 have been vocal in their calls for a share of the pie in recent years, but who else might be in with a shout? Google? Newstalk? The Irish Times? The Indo? Broadsheet? Storyful? Damien Mulley?

Earlier today, Jason labelled it dole for private business. He’s not far wrong. Only question is, which business? 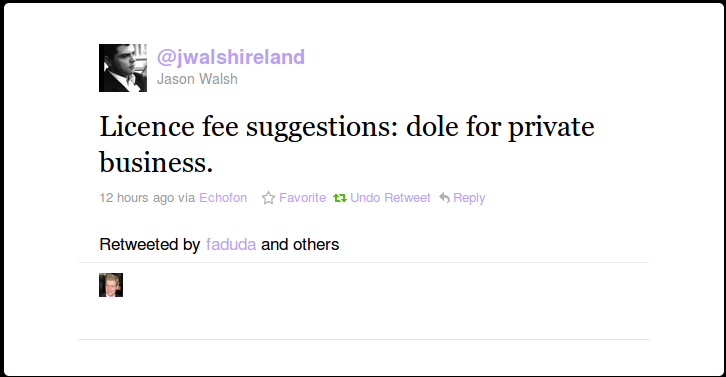