It’s been a busy week, between Freelance Forum and its aftermath, and a few other things. But there was one advantage to being busy doing other things. Without the newsmag constantly to the forefront of my mind, occasional thoughts would pop up from angles I hadn’t considered before.

Given the week that’s in it – the Boston marathon attack, excel errors in economics papers, and the Iona Institute’s submission to the constitutional convention on same-sex marriage – media failings in checking facts have been to the fore. Sometimes, in the fog of a breaking story, mistakes are inevitable, but increasing real time competition and social media ampliy those errors as never before.

Closer to home, David Norris’s questions about the Iona institute, raised in the Seanad on Tiursday, show speed isn’t always an excuse. Iona’s position paper has been public for weeks, and underreported.

All of which made me realise, one of the benefits of setting up a newsmag is that I can realise a long-held idea of mine, a regular, thorough, fact-checker taking a ruler to some of the claims that float around unchallenged in the mediasphere.

Oh and by the way, the future online newsmag now has a name: Guth. 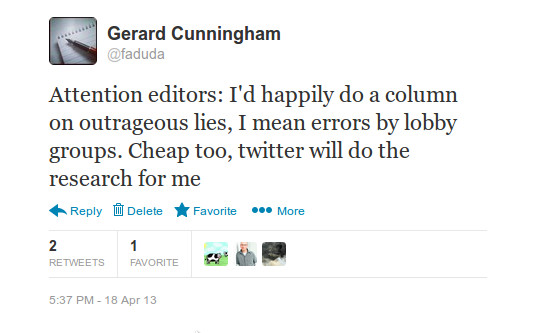