Comics are two dimensional. Literally. And because of that, I harbour a regular bias against comic characters, who are as two dimensional as the format in which they appear. But as more of my leisure entertainment is rooted in comics, that bias is challenged more and more.

There’s comics in cinemas. And on TV. There’s no getting away from them. 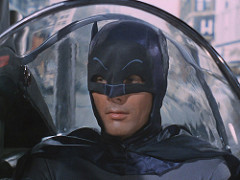 But so far at least, only the American characters are making it to the screen (even if sometimes written or heavily influenced by British authors like Alan Moore.)

But I don’t know most of the comics. Sure, everyone knows Superman, Batman, Spiderman, the Hulk and Captain America. And I suppose most people know the Flash, the Hulk, Iron Man. But Hawkman? Ant-Man? The talking racoon?

So the movies and TV stories need to stand on their own. Superman or Batman comes with goodwill. Viewers know where it’s going, so they’re forgiving. A talking racoon? You’ve got two minutes to make your pitch.

So in a way, it helps if the characters are two dimensional. A simple comic character is a simple pitch.

And sometimes, complexity gets hacked on to an existing template. The X-men evolve into a metaphor for discrimination and equal rights, from concentration camps to US race relations to gay rights.

But even then, the debates are often a case of “here’s a comic book reduction of the argument, now lets fight.”

That was the Marvel Civil War, for example. A debate that acts as a proxy for privacy wars and surveillance, or maybe for gun control, reduced to Tony Stark and Steve Austin exchanging blows, and a neat resolution at the end.

Spoiler alert: The surveillance state won, at least in the print version. That may change on screen, since it’s a Captain America film.

There are comics guys pulling their hair out at that over-simplification, because they followed the Civil War arc in detail. But stories evolve.