A nascent campaign to repeal the constitutional provision on blasphemy has received support from an unexpected source: the Anglican Bishop of Cork.

Atheist Ireland, a group established ‘to build a rational, ethical and secular society free from superstition and supernaturalism’ has decided it will oppose the new law, signed by President McAleese today.

And the Bishop of Cork, Cloyne and Ross, the Right Reverend Paul Colton, has supported the campaign through his twitter account. 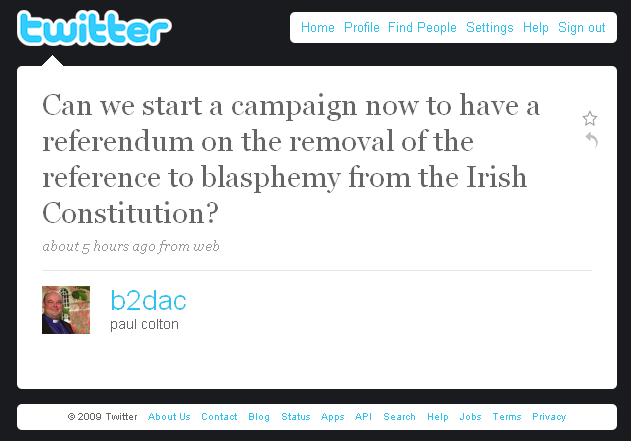 ‘Can we start a campaign now to have a referendum on the removal of the reference to blasphemy from the Irish Constitution?’ the bishop tweeted today.

Atheist Ireland will campaign to ‘the repeal of this anachronistic and dangerous blasphemy law, as part of our wider campaign for an ethical and secular Ireland’.

A spokesman called on justice minister Dermot Ahern to delay signing the order making the blasphemy sections of the Defamation Act operable until a constitutional referendum is held.

Atheist Ireland is headed by Michael Nugent, one of the writers of ‘I, Keano.’

Ahern has said he would prefer to abolish blasphemous libel, but included the provision in the bill for constitutional reasons.