The average industrial wage is a moveable feast. Last year David Cullinane told me he took home €530 a week. Pearse Doherty takes home €540 a week at present. That’s the thing with averages. They change over time. How Sinn Féin managed a wage increase when incomes are falling is a question for another day.

Earlier on twitter, I was told I was “the only one saying SF draw the AIW from the taxpayer. Doherty gets AIW rest to party”.

Yet that cannot happen. Pearse’s account show he is paid €57550 by the Oireachtas (€93K less taxes). He then uses part of that money to pay an employee.

Contrary to what my twitter debater thinks, Pearse couldn’t possibly hand over €24011.24 to the party. That would be illegal. The maximum allowed donation is €6348.59. 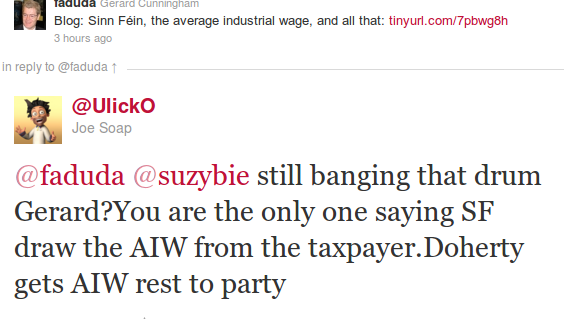