David Cameron has let the cat out of the bag. Northern Ireland costs too much.

Wikipedia puts the cost to the British exchequer at five billion quid in 2006. That’s one fifth of all economic output. Annually. Despite this, the North remains an economic basketcase.

By contrast, the Republic benefited from a EU investment in infrastructure of ten billion euro after the Maastricht treaty was signed. That spend is credited with kickstarting a boom lasting close to two decades (though the hangover is a bitch).

No wonder Cameron, who promised to ‘tear down big government‘, is annoyed.

In Northern Ireland, government spending is different. In the Republic, a new road or a FÁS scheme buys votes for a local TD. But the politicians making spending decisions for the North don’t benefit directly. The next chancellor, whether Tory or Labour (or even Liberal) will not have parliamentary colleagues in West Belfast or Tyrone. Even allowing for the Tory/Ulster Unionist pact, government spending there buys peace, not votes.

That’s close to three grand a year per head.

It would almost be worthwhile to just write everyone a cheque to leave, provided they promise never again to use the word ‘situation’. 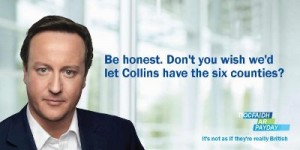